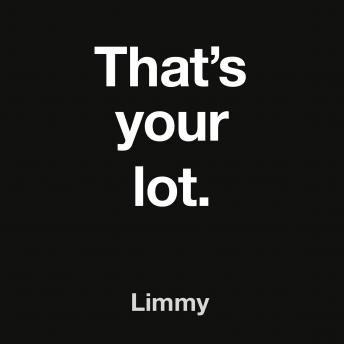 Download or Stream instantly more than 55,000 audiobooks.
Listen to "That’s Your Lot" on your iOS and Android device.

This is Limmy’s second book.


Tom is in a soft play with his daughters. He’s bored. He’s so bored he can move things with his mind.


A man fills up a mate’s biscuit tin without ever telling him, to see what happens.


Maggie’s boyfriend Iain bought a curtain. It keeps attacking them. She wants it out the house.


A man is sitting in his wheelie bin at two in the morning, and he wants to tell you why.


Kenny’s mate Scott is suicidal and ridden with guilt. Kenny takes him on holiday to Benidorm. It’ll be some laugh.


‘Didn't realise pieces of paper with no pictures on could be so funny. I mean I was cryin’ all day yesterday into this book. Hilarious’ - Someone on Amazon