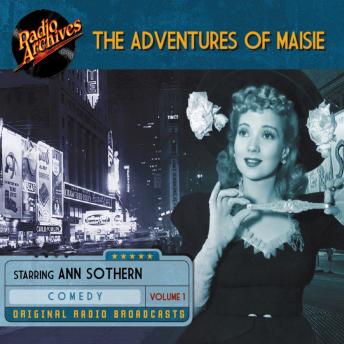 The Adventures of Maisie, Volume 1

Download or Stream instantly more than 55,000 audiobooks.
Listen to "The Adventures of Maisie, Volume 1" on your iOS and Android device.

One of the many series created by MGM Radio Attractions in the late 1940s, "The Adventures of Maisie" was produced at NBC in Hollywood and starred Ann Sothern as Maisie Revere, a brassy Jill-of-all-trades whose hard luck in life and love was matched with a heart of pure gold. Based on the popular movies of the 1940s, this hilarous series related the comical misadventures of the sassy showgirl in tales that regularly featured such well-known talents as Sheldon Leonard, Hans Conried, Bea Benaderet, and Frank Nelson in supporting roles. Sothern - a long-time MGM star who was made the sassy Miss Revere her signature role - brought a sincere sweetness to the part, making Maisie one of the most memorable characters in popular entertainment.