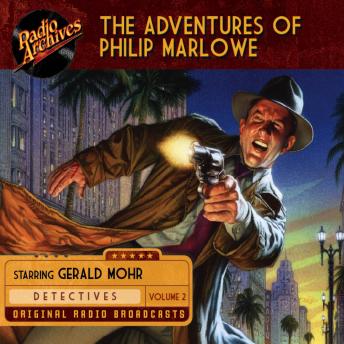 The Adventures of Philip Marlowe, Volume 2

Download or Stream instantly more than 55,000 audiobooks.
Listen to "The Adventures of Philip Marlowe, Volume 2" on your iOS and Android device.

Gerald Mohr stars as Raymond Chandler's hard-boiled gumshoe in "The Adventures of Philip Marlowe", a series based on one of the most popular sleuths in the history of crime fiction. First aired in 1947 with Van Heflin in the title role, Chandler disliked the initial incarnation, dubbing it "totally flat". However, in the 1948 revival, Chandler admitted satisfaction, remarking that Mohr's voice "packed personality." Mohr indeed made the role of Marlowe his own, portraying a brash and forceful tough guy who could let fly with the occasional wisecrack. The scripts were equally tough, focusing on hard-hitting action while also showcasing many of the distinguished actors and actresses from Hollywood's Radio Row, including Lawrence Dobkin, Jeff Corey, Betty Lou Gerson, and Harry Bartell.