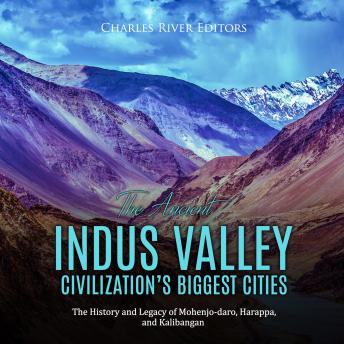 The Ancient Indus Valley Civilization's Biggest Cities: The History and Legacy of Mohenjo-daro, Harappa, and Kalibangan

Download or Stream instantly more than 55,000 audiobooks.
Listen to "The Ancient Indus Valley Civilization's Biggest Cities: The History and Legacy of Mohenjo-daro, Harappa, and Kalibangan" on your iOS and Android device.

When one thinks of the world's first cities, Sumer, Memphis, and Babylon are some of the first to come to mind, but if the focus then shifts to India, then Harappa and Mohenjo-daro will likely come up. These cities owe their existence to India's oldest civilization, known as the Indus Valley Civilization or the Harappan Civilization, which was contemporary with ancient Mesopotamia and ancient Egypt and had extensive contacts with the former, making it one of the most important early civilizations in the world. Spread out along the rivers of the Indus River Valley, hundreds of settlements began forming around 3300 BCE, eventually coalescing into a society that had all of the hallmarks of a true civilization, including writing, well-developed cities, a complex social structure, and long-distance trade.

The fact that the ancient Indus Valley Civilization is also often referred to as the Harappan Civilization demonstrates how important the discovery of Harappa is. As archaeologists and historians began to uncover more of the ancient Harappa site in the 19th and early 20th centuries, a more complete picture of the city emerged, namely its importance. Research has shown that Harappa was one of the three most important Indus Valley cities, if not the most important, with several mounds of settlements uncovered that indicate building activities took place there for over 1,000 years. At its height, Harappa was a booming city of up to 50,000 people who were divided into neighborhoods by walls and who went about their daily lives in well-built, orderly streets. Harappa also had drainage systems, markets, public baths, and other large structures that may have been used for public ceremonies. Ancient Harappa was truly a thriving and vibrant city that was on par with contemporary cities in Mesopotamia such as Ur and Memphis in Egypt.