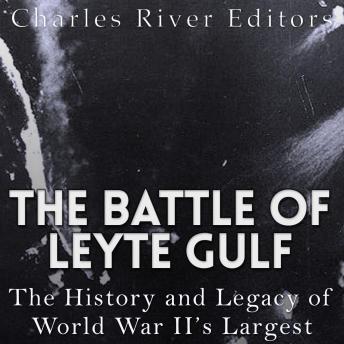 The Battle of Leyte Gulf: The History and Legacy of World War II's Largest Naval Battle

Download or Stream instantly more than 55,000 audiobooks.
Listen to "The Battle of Leyte Gulf: The History and Legacy of World War II's Largest Naval Battle" on your iOS and Android device.

The waters of the Pacific Ocean – stretching deep blue under the tropical sun, or scourged by typhoons – provided World War II's most far-flung battlefield. Two of the world's premier mid 20th century maritime powers, the United States of American and the Empire of Japan, grappled for supremacy across that pelagic expanse. In the process, they forcefully sounded the knell of battleships and naval gunnery, ushering in the era of the aircraft carrier and the submarine.

As 1944 passed, the U.S. Navy (USN) steadily drove the Imperial Japanese Navy (IJN) westward, closer to the Japanese home islands and defeat. Nevertheless, the IJN remained aggressive, hoping to launch a devastating attack on the American fleets to improve their nation's bargaining position, or perhaps even reverse the fortunes of war. This, of course, ignored a pair of previous catastrophic failures of similar plans, at Midway and the Battle of the Philippine Sea, otherwise known as the “Great Marianas Turkey Shoot” due to the loss of around 480 Japanese aircraft at a cost of 49 US planes.

The Americans forced the Japanese to abandon their forward base at Truk. At the same time, the USN moved its main fleet base westward, first to Eniwetok. Due to the constraints of the era's technology, plus the necessity to maintain a robust logistics chain across the Pacific's vast spaces, the island-hopping campaign represented a strategic necessity, with only the specific islands taken or bypassed open to debate.

The U.S. aimed to take Ulithi as the new site for a new forward base in early autumn 1944, pushing fleet resupply even closer to Japan's last bastion. From there, US President Franklin D. Roosevelt, swayed by the plans and arguments of General Douglas MacArthur, planned to seize a number of islands and then Leyte in the Philippines as a prelude to invasion of Luzon, then Formosa.

Conducting massive air raids on Leyte in September, Admiral William “Bull” Halsey's air groups destroyed 500 Japanese aircraft and 59 ships at a cost of 9 aircraft shot down. This prompted Halsey to send an urgent message to Roosevelt, then at the Octagon Conference in Canada with British Prime Minister Winston Churchill, claiming a feeble defense of the Philippines.

Trying to take advantage of this intelligence, the Joint Chiefs moved up the timetable for the landings on Leyte to October 20th. The Americans would now bypass several islands such as Yap, to take Leyte and Luzon quickly, though Ulithi and several other islands remained earmarked for conquest.

The USN assembled a massive attack force for Leyte, consisting of 7th Fleet, charged with the actual amphibious landings, and 3rd Fleet's Task Force 38, Halsey's powerful strike force centered around 17 aircraft carriers bearing some 1,000 aircraft. The Americans, however, did not realize that a powerful IJN force lurked near Singapore. This armada, Vice Admiral Kurita Takao, found itself waiting for the USN to move into the jaws of the trap and, hopefully, suffer a crippling defeat.

The ensuing Battle of Leyte Gulf would consist of a series of coordinated actions over the course of several days in late October, and though some confusion would cause problems for the Americans, the end result was the permanent crippling of the Japanese navy and the taking of Leyte Island, a crucial step in liberating the Philippines as a whole. Cut off from badly needed supplies after the battle, the Japanese lacked the resources necessary to continue fueling their navy, much of which would sit idle for the remainder of the war.