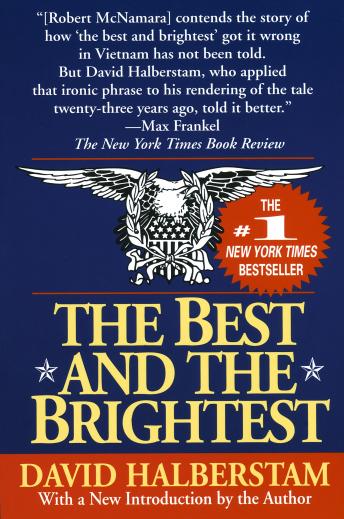 The Best and the Brightest

Download or Stream instantly more than 55,000 audiobooks.
Listen to "The Best and the Brightest" on your iOS and Android device.

David Halberstam’s masterpiece, the defining history of the making of the Vietnam tragedy, with a new Foreword by Senator John McCain.

Using portraits of America’ s flawed policy makers and accounts of the forces that drove them, The Best and the Brightest reckons magnificently with the most important abiding question of our country’ s recent history: Why did America become mired in Vietnam, and why did we lose? As the definitive single-volume answer to that question, this enthralling book has never been superseded. It is an American classic.

Praise for The Best and the Brightest

“The most comprehensive saga of how America became involved in Vietnam. . . . It is also the Iliad of the American empire and the Odyssey of this nation’s search for its idealistic soul. The Best and the Brightest is almost like watching an Alfred Hitchcock thriller.”—The Boston Globe

“Deeply moving . . . We cannot help but feel the compelling power of this narrative. . . . Dramatic and tragic, a chain of events overwhelming in their force, a distant war embodying illusions and myths, terror and violence, confusions and courage, blindness, pride, and arrogance.”—Los Angeles Times

“A fascinating tale of folly and self-deception . . . [An] absorbing, detailed, and devastatingly caustic tale of Washington in the days of the Caesars.”—The Washington Post Book World

“Seductively readable . . . It is a staggeringly ambitious undertaking that is fully matched by Halberstam’s performance. . . . This is in all ways an admirable and necessary book.”—Newsweek

“A story every American should read.”—St. Louis Post-Dispatch