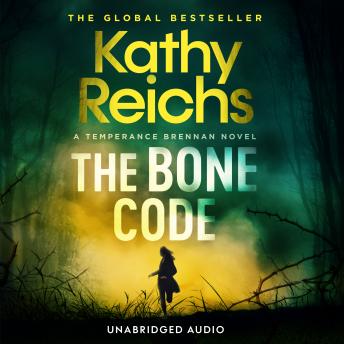 Download or Stream instantly more than 55,000 audiobooks.
Listen to "The Bone Code" on your iOS and Android device.

'Over the course of twenty books, Kathy Reichs and Tempe Brennan have thrilled readers with pacey, mazey tales . . . We readers are truly grateful' IAN RANKIN

A storm has hit South Carolina, dredging up crimes of the past.

En route to Isle of Palms, a barrier island off the South Carolina coast, forensic anthropologist Temperance Brennan receives a call from the Charleston coroner. During the storm, a medical waste container has washed up on the beach. Inside are two decomposed bodies wrapped in plastic sheeting and bound with electrical wire. Chillingly, Tempe recognizes many details as identical to those of an unsolved case she handled in Quebec fifteen earlier. With a growing sense of foreboding, she flies to Montreal to gather evidence and convince her boss Pierre LaManch to reopen the cold case. She also seeks the advice—and comfort—of her longtime beau Andrew Ryan.

Meanwhile, a storm of a different type gathers force in South Carolina. The citizens of Charleston are struck by capnocytophaga, a bacterium that, at its worst, can eat human flesh. Thousands panic and test themselves for a rare genetic mutation that may have rendered them vulnerable.

Shockingly, Tempe eventually deduces not only that the victims in both grisly murder cases are related, but that the murders and the disease outbreak also have a common cause . . .

'Kathy Reichs is expert at making science both scary and thrilling, and she's in top form in The Bone Code. The story moves at such a relentless pace I couldn't stop turning the pages' TESS GERRITSEN

'The Bone Code is a brilliant entry in a ground-breaking series and does Temperance Brennan proud . . . It’s smart, gripping, and builds to a heart-stopping crescendo' LOUISE PENNY

'A Conspiracy of Bones shows off Kathy Reichs’ dazzling new level of plotting mastery. A thrilling read from one of my favorite writers' KARIN SLAUGHTER

'One of the absolute best thrillers of the year . . . A great series has just gotten greater' JEFFERY DEAVER