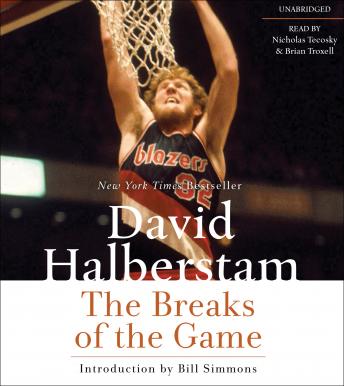 The Breaks of the Game

Download or Stream instantly more than 55,000 audiobooks.
Listen to "The Breaks of the Game" on your iOS and Android device.

A New York Times bestseller, David Halberstam's The Breaks of the Game focuses on one grim season (1979-80) in the life of the Bill Walton-led Portland Trail Blazers, a team that only three years before had been NBA champions.
More than six years after his death David Halberstam remains one of this country's most respected journalists and revered authorities on American life and history in the years since WWII. A Pulitzer Prize-winner for his groundbreaking reporting on the Vietnam War, Halberstam wrote more than 20 books, almost all of them bestsellers. His work has stood the test of time and has become the standard by which all journalists measure themselves.
The tactile authenticity of Halberstam's knowledge of the basketball world is unrivaled. Yet he is writing here about far more than just basketball. This is a story about a place in our society where power, money, and talent collide and sometimes corrupt, a place where both national obsessions and naked greed are exposed. It's about the influence of big media, the fans and the hype they subsist on, the clash of ethics, the terrible physical demands of modern sports (from drugs to body size), the unreal salaries, the conflicts of race and class, and the consequences of sport converted into mass entertainment and athletes transformed into superstars -- all presented in a way that puts the reader in the room and on the court, and The Breaks of the Game in a league of its own.