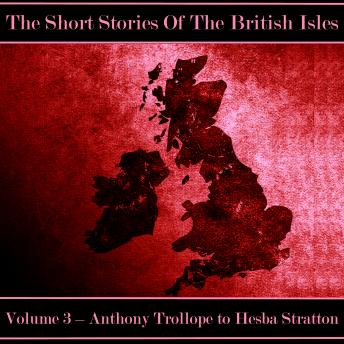 Download or Stream instantly more than 55,000 audiobooks.
Listen to "The British Short Story - Volume 3 - Anthony Trollope to Hesba Stratton" on your iOS and Android device.

These British Isles, moored across from mainland Europe, are more often seen as a world unto themselves. Restless and creative, they often warred amongst themselves until they began a global push to forge a World Empire of territory, of trade and of language.Here our ambitions are only of the literary kind. These shores have mustered many masters of literature. So this anthology's boundaries includes only those authors who were born in the British Isles - which as a geographical definition is the UK mainland and the island of Ireland - and wrote in a familiar form of English.Whilst Daniel Defoe is the normal starting point we begin a little earlier with Aphra Behn, an equally colourful character as well as an astonishing playwright and poet. And this is how we begin to differentiate our offering; both in scope, in breadth and in depth. These islands have raised and nurtured female authors of the highest order and rank and more often than not they have been sidelined or ignored in favour of that other gender which usually gets the plaudits and the royalties.Way back when it was almost immoral that a woman should write. A few pages of verse might be tolerated but anything else brought ridicule and shame. That seems unfathomable now but centuries ago women really were chattel, with marriage being, as the Victorian author Charlotte Smith boldly stated 'legal prostitution'. Some of course did find a way through - Jane Austen, the Brontes and Virginia Woolf but for many others only by changing their names to that of men was it possible to get their book to publication and into a readers hands. Here we include George Eliot and other examples.We add further depth with many stories by authors who were famed and fawned over in their day. Some wrote only a hidden gem or two before succumbing to poverty and death. There was no second career as a game show guest, reality TV contestant or youtuber. They remain almost forgotten outposts of talent who never prospered despite devoted hours of pen and brain.Keeping to a chronological order helps us to highlight how authors through the ages played around with characters and narrative to achieve distinctive results across many scenarios, many styles and many genres. The short story became a sort of literary laboratory, an early disruptor, of how to present and how to appeal to a growing audience as a reflection of social and societal changes. Was this bound to happen or did a growing population that could read begin to influence rather than just accept?Moving through the centuries we gather a groundswell of authors as we hit the Victorian Age - an age of physical mass communication albeit only on an actual printed page. An audience was offered a multitude of forms: novels (both whole and in serialised form) essays, short stories, poems all in weekly, monthly and quarterly form. Many of these periodicals were founded or edited by literary behemoths from Dickens and Thackeray through to Jerome K Jerome and, even some female editors including Ethel Colburn Mayne, Alice Meynell and Ella D'Arcy.Now authors began to offer a wider, more diverse choice from social activism and justice - and injustice to cutting stories of manners and principles. From many forms of comedy to mental meltdowns, from science fiction to unrequited heartache. If you can imagine it an author probably wrote it. At the end of the 19th Century bestseller lists and then prizes, such as the Nobel and Pulitzer, helped focus an audience's attention to a books literary merit and sales worth. Previously coffeehouses, Imperial trade, unscrupulous overseas printers ignoring copyright restrictions, publishers with their book lists as an appendix and the gossip and interchange of polite society had been the main avenues to secure sales and profits.