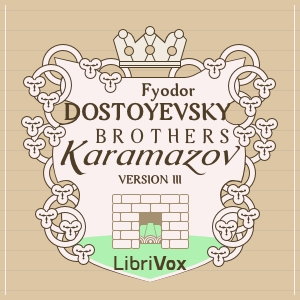 Download or Stream instantly more than 55,000 audiobooks.
Listen to "The Brothers Karamazov (version 3)" on your iOS and Android device.

Originally published in serial form in 1879-80, ÒThe Brothers KaramazovÓ is recognized as one of the very greatest masterpieces of world literature. It is the last and finest novel of Fyodor Dostoyevsky, who died before writing a planned sequel. The story is organized initially around the efforts of adult sons to deal with their cantankerous and exasperating father. More important, they also have to deal with the problem of how to live in a world where it is difficult to be sure of the truth Ñ whether that be ÒtruthÓ about others, about oneself, or about deep questions such as faith, doubt, free will, guilt, and responsibility. DostoyevskyÕs technique underlines the difficulty of attaining sure knowledge. The novelÕs psychological and philosophical depth sets the stage for modern novelists such as Joyce, Kafka, and Woolf. ÒThe Brothers KaramazovÓ has been a favorite book for readers as diverse as Albert Einstein, Sigmund Freud, Joseph Stalin, Vladimir Putin, and Hillary Clinton. (Translated by Constance Garnett)