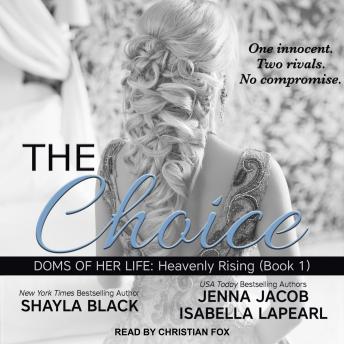 Download or Stream instantly more than 55,000 audiobooks.
Listen to "The Choice" on your iOS and Android device.

Heavenly Young doesn't have time for romance. The innocent nursing student is struggling to care for her ailing father, keep a roof over their head, and start a new career. Then fate further complicates her life by dropping two very different men in her lap and forcing her to make a choice that will change her life forever.

Dr. Ken Beckman-vascular surgeon by day, sadist by night-has three hard-and-fast rules: Never date where he works, never touch vanillas, and never get tangled up with a virgin. But the moment he meets Heavenly, he aches to toss his scruples aside and claim the untouched beauty. She's not ready for a man like him, but he can't make himself walk away-even when he discovers he's not the only one caught in her spell.

Seth Cooper, ex-cop turned private eye, isn't looking for a happily ever after, just a hot-and-sweaty good time. The minute he lays eyes on Heavenly, he's all for coaxing the angel into his bed. But it isn't long before she's so deep under his skin that he's contemplating putting his broken past behind him and turning his life upside down for her. Then he realizes he's got competition . . .