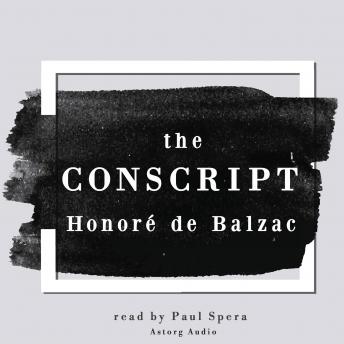 The Conscript, a short story by Honoré de Balzac

Download or Stream instantly more than 55,000 audiobooks.
Listen to "The Conscript, a short story by Honoré de Balzac" on your iOS and Android device.

Honoré de Balzac is one of the most renowned French novelists. His magnum opus, La Comédie Humaine (The Human Comedy) is a panorama of life in France in the years after the fall of Napoleon; his keen observation of detail, subtle psychology and unfiltered representation of society gave him his place as one of the founders and great masters of realism in European literature. His characters are complex, morally ambiguous and utterly real. The Conscript is one of the stories from the great collection making up the Human Comedy; it captures the human cost of revolution in a terribly touching way. Madame de Dey is a noble, rich widow whose son, an officer in the dragoons, has chosen to follow the Princes into exile. She remains behind in a precarious position to look after his fortune. She is now awaiting her son's arrival in disguise.