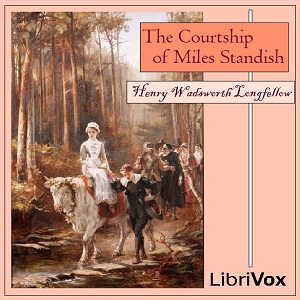 The Courtship of Miles Standish

Download or Stream instantly more than 55,000 audiobooks.
Listen to "The Courtship of Miles Standish" on your iOS and Android device.

During the late nineteenth century and until the middle of the twentieth, many elementary classrooms in America featured (along with a Gilbert Stuart portrait of Washington) a black-and-white print of a group of New England pilgrims on their way to church, the men carrying their muskets. Every school child at that time was intimately acquainted with the story of the Mayflower and the Plymouth colony in Massachusetts. Among the historical figures, one of the best known was Captain Miles Standish, the military commander of the little “army,” which consisted of a bare handful of men, who repeatedly defeated many times their number of hostile Indians. The children also knew the friendly Indian Squanto and the young pilgrim gentleman John Alden and the lovely maiden Priscilla Mullins.
In the middle grades practically all students used to read Longfellow’s long narrative poem The Courtship of Miles Standish, telling the story of these real people. The plot is initiated by Standish’s request that his friend, the better educated and more eloquent Alden, plead his case for him and persuade Priscilla to marry this rough middle-aged widower. What the captain did not know was that John Alden was also deeply in love with the same young girl. Presentday readers will be impressed that the delightful Miss Mullins seems to be a quite modern young lady, with a mind of her own. Many hundreds of Americans trace their ancestry to John and Priscilla, whose descendants also include Presidents John and John Quincy Adams and Longfellow himself. Those who are not familiar with their romance will find it a most pleasant tale. (Introduction by Leonard Wilson)