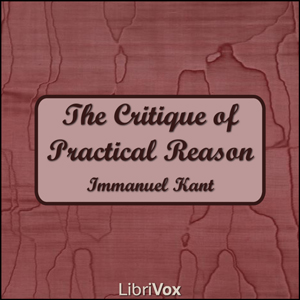 The Critique of Practical Reason

Download or Stream instantly more than 55,000 audiobooks.
Listen to "The Critique of Practical Reason" on your iOS and Android device.

The Critique of Practical Reason (Kritik der praktischen Vernunft) is the second of Immanuel Kant's three critiques, first published in 1788. It follows on from his Critique of Pure Reason and deals with his moral philosophy. The second Critique exercised a decisive influence over the subsequent development of the field of ethics and moral philosophy, becoming the principle reference point for ethical systems that focus on the rightness or wrongness of actions themselves, as opposed to the rightness or wrongness of the consequences of those actions. Subsequently termed "deontological ethics", Kant's ethical system also laid the groundwork of moral absolutism, the belief that there are absolute standards against which moral questions can be judged, and that certain actions are right or wrong, devoid of the context of the act. (Summary by Wikipedia and Ticktockman)