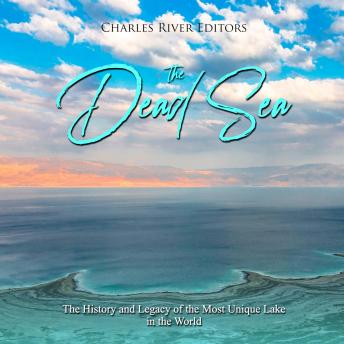 The Dead Sea: The History and Legacy of the Most Unique Lake in the World

Download or Stream instantly more than 55,000 audiobooks.
Listen to "The Dead Sea: The History and Legacy of the Most Unique Lake in the World" on your iOS and Android device.

If the world had a navel, it would be the Dead Sea, the lowest point on Earth where one can still stand on dry land. The photographs of this unique lake seem to be taken from a science fiction movie, or a land devastated after a nuclear holocaust. To others, the fluffy shores could remind them of Antarctica although it is in one of the warmest spots on the planet. Its white, creamy masses, scattered along golden beaches, are not ice floes or frozen water, but effervescent salt formations. The famous Jordan River, where the Hebrew people entered the Promised Land and Jesus was baptized, flows into the lake, but the basin is so deeply sunk into the face of the planet that the waters never leave, as if they had fallen into a small black hole where nothing can escape. If the level of the lake does not increase, despite having no drainage to the sea, it is as a result of intense evaporation.

The Dead Sea is also an archaeological site loaded with history. Known among the first civilizations in the region as 'Sea of Asphalt' and “Salt Sea,” innumerable myths and legends lend it an air of mystery, as if it attracted sterility and misfortune while eradicating all life from its waters. It was perhaps the inhospitable feel of the place, the almost total desolation surrounding it, which led the writer of the Pentateuch to imagine that many years ago, a cataclysm sent to annihilate perverted people had taken place there. The Book of Genesis, possibly picking up the memory of a catastrophic event, placed the cities of Sodom and Gomorrah near the Dead Sea, and they were left desolate after fire rained from the sky. An Arab explorer from the Middle Ages called it “the gate of hell” due to its desolate landscapes, extreme temperature, and stinking air. Nothing can live in the waters of the Dead Sea aside from some single-celled organisms and certain fungi due to its high salinity - the third part of the blue that fills the basin are minerals.