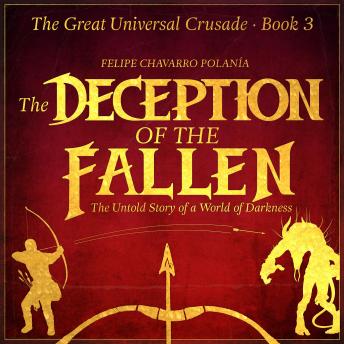 THE DECEPTION OF THE FALLEN: THE UNTOLD STORY OF A WORLD OF DARKNESS AND DECEPTION

Download or Stream instantly more than 55,000 audiobooks.
Listen to "THE DECEPTION OF THE FALLEN: THE UNTOLD STORY OF A WORLD OF DARKNESS AND DECEPTION" on your iOS and Android device.

The never-before-seen story of the origin of the human kingdoms and their decline in the universe of the Great Universal Crusade, with pages of new content for those who wish to know the true origin of all things.


This book contains the most complete history of the origin of the Kingdoms, the confrontations between men and beings that we thought were part of mythology, but that existed and exerted a very powerful influence on the history of mankind. A story honed by vibrant descriptions of the epic battles in the annals of history, bitter rivalries and daring rebellions that end with the coming of the promised Messiah. Later, after the event that split the history of the Universe in two, leaving the before and after in its wake, the antagonistic forces reorganise for the dynamics of a new battle, an event that leads to the establishment of new Kingdoms and the emergence of a new strategy to wage THE GREAT UNIVERSAL CRUSADE involving the three kingdoms that make up a Universe unknown to the one we know.

Credit to ©2022 Fesliyan Studios Inc. Some sounds were used.