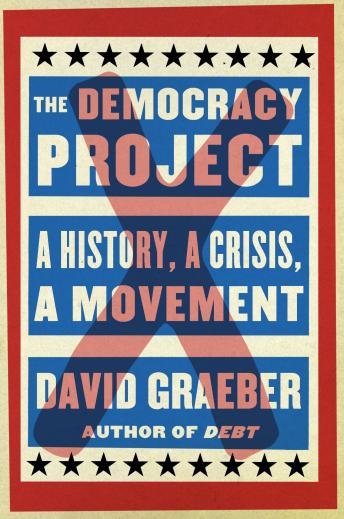 The Democracy Project: A History, A Crisis, A Movement

Download or Stream instantly more than 55,000 audiobooks.
Listen to "The Democracy Project: A History, A Crisis, A Movement" on your iOS and Android device.

Democracy has been the American religion since before the Revolution—from New England town halls to the multicultural democracy of Atlantic pirate ships. But can our current political system, one that seems responsive only to the wealthiest among us and leaves most Americans feeling disengaged, voiceless, and disenfranchised, really be called democratic? And if the tools of our democracy are not working to solve the rising crises we face, how can we—average citizens—make change happen?

David Graeber, one of the most influential scholars and activists of his generation, takes readers on a journey through the idea of democracy, provocatively reorienting our understanding of pivotal historical moments, and extracts their lessons for today—from the birth of Athenian democracy and the founding of the United States of America to the global revolutions of the twentieth century and the rise of a new generation of activists. Underlying it all is a bracing argument that in the face of increasingly concentrated wealth and power in this country, a reenergized, reconceived democracy—one based on consensus, equality, and broad participation—can yet provide us with the just, free, and fair society we want.

The Democracy Project tells the story of the resilience of the democratic spirit and the adaptability of the democratic idea. It offers a fresh take on vital history and an impassioned argument that radical democracy is, more than ever, our best hope.

“Written in a brash, engaging style, the book is also a philosophical inquiry into the nature of debt—where it came from and how it evolved.”—The New York Times Book Review

“The book is more readable and entertaining than I can indicate. . . . Graeber is a scholarly researcher, an activist and a public intellectual. His field is the whole history of social and economic transactions.”—Peter Carey, The Observer

“One of the year’s most influential books. Graeber situates the emergence of credit within the rise of class society, the destruction of societies based on ‘webs of mutual commitment’ and the constantly implied threat of physical violence that lies behind all social relations based on money.”—Paul Mason, The Guardian

“Part anthropological history and part provocative political argument, it’s a useful corrective to what passes for contemporary conversation about debt and the economy.”—Jesse Singal, The Boston Globe

“Terrific . . . In the best anthropological tradition, he helps us reset our everyday ideas by exploring history and other civilizations, then boomeranging back to render our own world strange, and more open to change.”—Raj Patel, The Globe and Mail