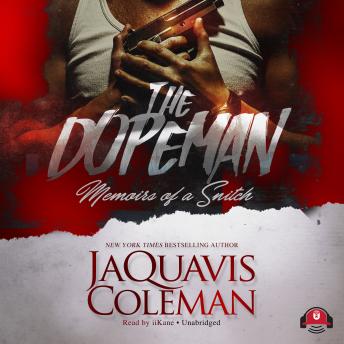 The Dopeman: Memoirs of a Snitch

Download or Stream instantly more than 55,000 audiobooks.
Listen to "The Dopeman: Memoirs of a Snitch" on your iOS and Android device.

The Dopeman: Memoirs of a Snitch is a complex tale about the life and times of one the biggest drug traffickers the Midwest has ever seen.

In the summer of 2009, the FBI has launched an intricate plot to take down one of the most prolific drug organizations, and Seven Smith is their main target. Seven establishes a relationship with an up-and-coming hustler and takes him under his wing. But unbeknownst to Seven, his protégé works for the authorities.

The young hustler falls in love with a woman who is off-limits, and he has to make a difficult decision that puts many people’s lives at risk.

Lola Banks is the daughter of a well-known hit man and street legend in Ohio. When she lays her eyes on the out-of-towner/snitch, it becomes a forbidden love. She is caught in a web of lies and deceit, only to learn the hurtful truth in the very end. This is a hustler’s love story at its absolute finest.