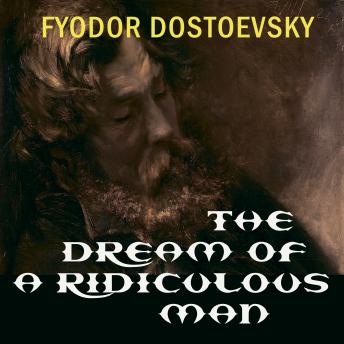 The Dream of a Ridiculous Man (Fyodor Dostoevsky)

Download or Stream instantly more than 55,000 audiobooks.
Listen to "The Dream of a Ridiculous Man (Fyodor Dostoevsky)" on your iOS and Android device.

The story opens with the narrator wandering the streets of St. Petersburg. He contemplates how he has always been a ridiculous person, and also, how recently, he has come to the realization that nothing much matters to him any more. It is this revelation that leads him to the idea of suicide. The narrator of the story reveals that he had bought a revolver months previous with the intent of shooting himself in the head. Despite a dismal night, the narrator looks up to the sky and views a solitary star. Shortly after seeing the star, a little girl comes running towards him. The narrator surmises that something is wrong with the girl's mother. He shakes the girl away and continues on to his apartment. Once in his apartment, the narrator sinks into a chair and places his gun on a table next to him. He hesitates to shoot himself because of a nagging feeling of guilt that has plagued him ever since he shunned the girl. The narrator grapples with internal questions for a few hours before falling asleep in the chair. As he sleeps, he descends into a very vivid dream.