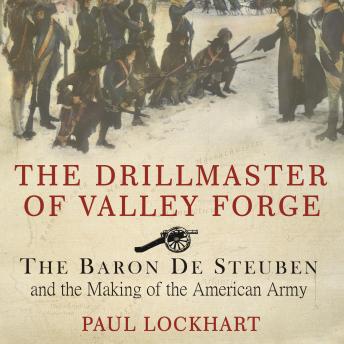 The Drillmaster of Valley Forge: The Baron De Steuben and the Making of the American Army

Download or Stream instantly more than 55,000 audiobooks.
Listen to "The Drillmaster of Valley Forge: The Baron De Steuben and the Making of the American Army" on your iOS and Android device.

The image of the Baron de Steuben training Washington's ragged, demoralized troops in the snow at Valley Forge is part of the iconography of our Revolutionary heritage, but most history fans know little more about this fascinating figure.

In the first book on Steuben since 1937, Paul Lockhart, an expert on European military history, finally explains the significance of Steuben's military experience in Europe. Steeped in the traditions of the Prussian army of Frederick the Great-the most ruthlessly effective in Europe-he taught the soldiers of the Continental Army how to fight like Europeans. His guiding hand shaped the army that triumphed over the British at Monmouth, Stony Point, and Yorktown. And his influence did not end with the Revolution. Steuben was instrumental in creating West Point and in writing the 'Blue Book'-the first official regulations of the American army. His principles have guided the American armed forces to this day.

Steuben's life is also a classic immigrant story. A failure in midlife, he uprooted himself from his native Europe to seek one last chance at glory and fame in the New World. In America he managed to reinvent himself-making his background quite a bit more glamorous than it really was-but redeeming himself by his exceptional service and becoming, in a sense, the man he claimed to be.