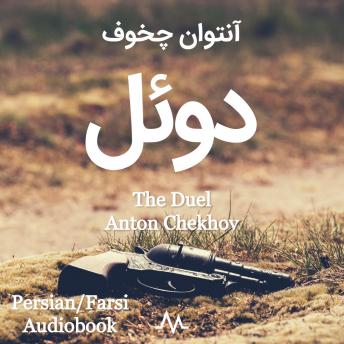 Download or Stream instantly more than 55,000 audiobooks.
Listen to "The Duel" on your iOS and Android device.

The Duel is a novella by Anton Chekhov and was published in 1891. It tells the story of the debates between a scientist, a government worker, his mistress, a deacon, and a physician about wits and ethics. This verbal battle leads to a violent contest: the duel. The story begins with Ivan Andreitch Laevsky – a government worker - who has run off with a married woman, Nadyezyhda Fyodorovna to a small town in the Caucasus.
While there, he forms several acquaintanceships with a colorful array of characters. Among them, he has friends and enemies. But there’s one person in particular who has it in for him – the zoologist Von Koren. Von Koren is broad-shouldered, swarthy, vigorous and hardheaded realist young man.
This version of the book is translated by Matin Karimi to Persian (Farsi) and narrated by Amir Mohammadi. The Persian version of Duel’s audiobook is published by Maktub worldwide.