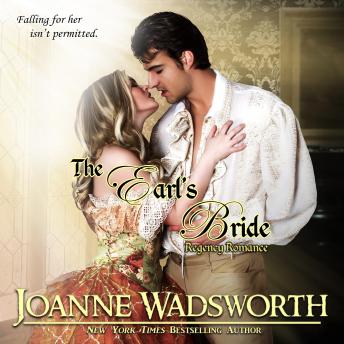 Download or Stream instantly more than 55,000 audiobooks.
Listen to "The Earl's Bride" on your iOS and Android device.

Death and danger won’t halt this loyal lady from aiding her earl in uncovering the dark secrets within his family. A spine-tingling Regency romance from New York Times Bestselling Author Joanne Wadsworth.

Falling for her isn’t permitted.

Following the brutal murder of his father and elder brother, James Hargrove, the Earl of Donnelly, comes into a title he never expected. His future was set, to join the 18th Royal Hussars and dedicate his life to his king and country. Now, he’s been dragged into the shadowy depths of the underworld as he seeks to discover the impossible—to uncover who murdered his loved ones.

Lady Sophia Trentbury has long since loved the earl and fears for his life when she learns of his decision to uncover who murdered his father and brother. She’ll do whatever it takes to aid him in his mission, even if she must immerse herself in London’s deadly underworld of spies and espionage.

As the earl is swept into a lethal circle of deadly enemies, he must discover what is truth and what is deception, and all while protecting the scorching love of his lady who won’t leave his side, even when he demands it. Can he hope for victory?

Each book in this series is standalone, and can be enjoyed out of sequence.