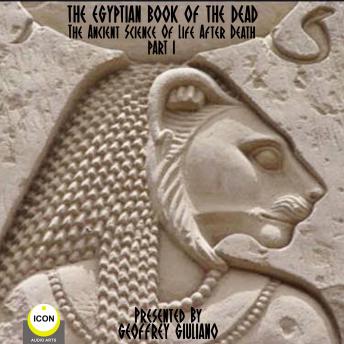 Download or Stream instantly more than 55,000 audiobooks.
Listen to "The Egyptian Book Of The Dead - The Ancient Science Of Life After Death - Part 1" on your iOS and Android device.

“There is neither water nor air here, its depth is unfathomable, it is as dark as the darkest night, and men wander about here helplessly. A man cannot live here and be satisfied, and he cannot gratify the cravings of affection”

“May I look upon my soul and my shadow for the texts neither form a connected work nor belong to one period.”

“Thoth was also the “tongue” of the Creator, and he at all times voiced the will of the great god, and spoke the words which commanded every being and thing in heaven and in earth to come into existence.” The Egyptian Book of the Dead

The Book of the Dead is an ancient Egyptian funerary text generally written on papyrus and used from the beginning of the New Kingdom to around 50 BCE. The original Egyptian name for the text is translated as Book of Coming Forth by Day or Book of Emerging Forth into the Light. A literal once in a lifetime audio experience.

Special thanks to author Brandon Stickney

Music By AudioNautix With Their Kind Permission