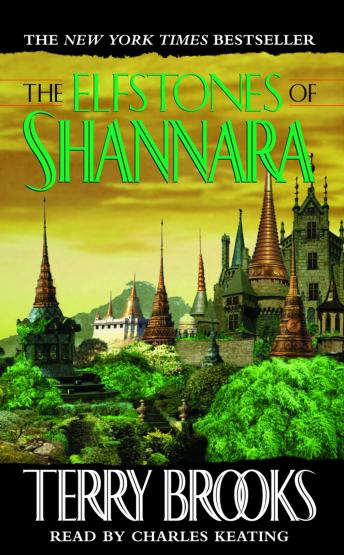 The Elfstones of Shannara

Download or Stream instantly more than 55,000 audiobooks.
Listen to "The Elfstones of Shannara" on your iOS and Android device.

In the far future, unbeknown to humankind, an apocalyptic war is brewing. Fearsome, vengeful Demons rage at the boundaries of the world, held at bay by a spell called the Forbidding. But now that barrier is dying. Evil is beginning to break through. And only the Chosen can banish the Demons back to their realm.

Wil Ohmsford is a healer, not a fighter; a man of duty, not great deeds. But this epic battle seeks him out, for he holds the Elfstones: mysterious protective talismans passed down by his grandfather. Wil is recruited to act as guardian to the Elf girl Amberle, who must venture far to deliver a seed that will help the Forbidding to grow again. The fate of civilization rests upon her shoulders—and the completion of her mission rests upon Wil’s. Now, as the forces of darkness descend, Wil and Amberle embark on a perilous journey, placing their faith in each other to survive the bloodthirsty terrors that await.

“Shannara was one of my favorite fictional worlds growing up, and I look forward to many return trips.”—Karen Russell, author of Swamplandia!

“If Tolkien is the grandfather of modern fantasy, Terry Brooks is its favorite uncle.”—Peter V. Brett, author of The Skull Throne