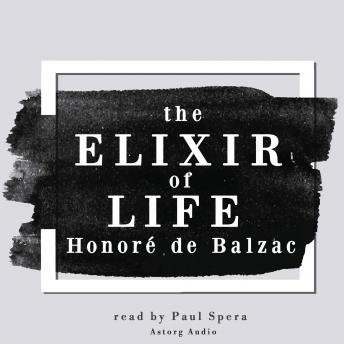 The Elixir of Life, a short story by Balzac

Download or Stream instantly more than 55,000 audiobooks.
Listen to "The Elixir of Life, a short story by Balzac" on your iOS and Android device.

The Elixir of Life is a fantastic tale by the French novelist and writer Honoré de Balzac in which he gives a satirical version of the legend of Don Juan. This early short story was originally published in 1830; like all the component pieces of Balzac's Comédie Humaine, it is considered a stand-alone piece of literature. The spoiled son of a Spanish nobleman, Don Juan Belvidero cannot wait for the moment to claim the family wealth and title for himself. His father has him called to his death-bed, to inform him that he is in possession of a magic, death-defying potion. If the son will only rub the liquid on his dead body, the father will come back to life. Don Juan assures his father that he will resurrect him, but will he keep his promise or betray the old man? Honoré de Balzac's keen observation of detail, subtle psychology and unfiltered representation of society gave him his place as one of the founders and great masters of realism in European literature, with his magnum opus, La Comédie Humaine (The Human Comedy). His characters are complex, morally ambiguous and utterly real.