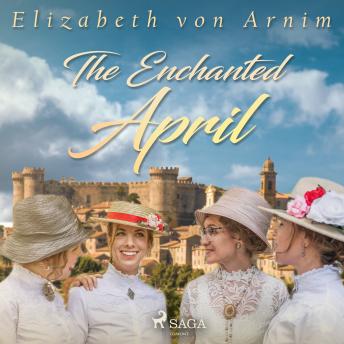 Download or Stream instantly more than 55,000 audiobooks.
Listen to "The Enchanted April" on your iOS and Android device.

Four very different women, all wanting to escape cold and dreary London for different reasons, come together to share a month's holiday in an Italian medieval castle. There’s timid Lotty Wilkins, terrified of her domineering husband; sober and religious Rose Arbuthnot; rigid and judgemental Mrs Fisher; and the breathtakingly beautiful but disillusioned and unhappy Lady Caroline Dester. They are lured to the castle by the advertised 'wisteria and sunshine', but they end up finding there so much more than they had bargained for. The place transforms them and their lives are unexpectedly changed. Von Arnim's story of their metamorphosis under the Italian sun is warm, witty, intelligent, and as enchanting as the title suggests.
-
Elizabeth von Arnim (1866–1941), née Mary Annette Beauchamp, was a British novelist. Born in Australia, her family returned to England when she was three years old; and she was Katherine Mansfield’s cousin.
She was first married to a Prussian aristocrat, the Graf von Arnim-Schlagenthin, and later to the philosopher Bertrand Russel’s older brother, Frank, whom she left a year later. She then had an affair with the publisher Alexander Reeves, a man thirty years her junior, and with H.G. Wells. Von Arnim moved a lot, living alternatively in the United Kingdom, Switzerland, Germany, Poland, before dying of influenza in South Carolina during the Second War.
Elizabeth von Arnim was an active member of the European literary scene, and entertained many of her contemporaries in her Chalet Soleil in Switzerland. She even hired E. M. Forster and Hugh Walpole as tutors for her five children. She is famous for her half-autobiographical, satirical novel 'Elizabeth and her German Garden' (1898), as well as for 'Vera' (1921), and 'The Enchanted April' (1922).