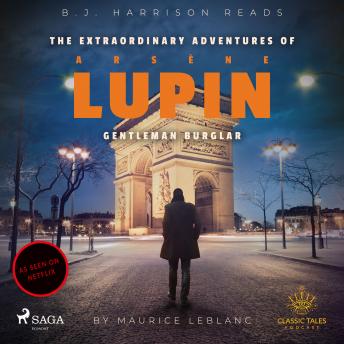 Download or Stream instantly more than 55,000 audiobooks.
Listen to "The Extraordinary Adventures of Arsene Lupin, Gentleman Burglar" on your iOS and Android device.

The book that inspired the new Netflix series, 'Lupin' with Omar Sy.

'The Extraordinary Adventures of Arsene Lupin, Gentleman Burglar' is the first collection of stories about the infamous thief, Arsene Lupin. Cunning, charming, and roguishly good-looking, Lupin leads the French police department on a merry dance across Belle Epoque Paris in these adventure-filled mysteries.

Evading the authorities, getting the girl and usually pocketing some rare jewel for himself, Arsene Lupin's adventures will keep readers of all ages on the edge of their seats.

Perfect for fans of Arthur Conan Doyle's Sherlock Holmes and Edgar Allan Poe's C. Auguste Dupin.
B. J. Harrison started his Classic Tales Podcast back in 2007, soaring to the top of the iTunes charts. He masterfully breathes life back into literary classics and plays with a wide array of voices and accents and has produced over 500 audiobooks. His productions of P. G. Wodehouse's Jeeves series and Shakespeare's Hamlet are regularly seen at the top of audiobook charts.

Now in collaboration with SAGA Egmont, his engaging narration of these famous stories is available to readers everywhere.
Maurice Leblanc was a French author during the late nineteenth century and early twentieth century. He lived in Paris during the Belle Epoque, and his literary legacy consists of novels and short stories. Though he wrote two well-received science fiction books, he was most famous for his gentleman thief adventure series, Arsene Lupin.