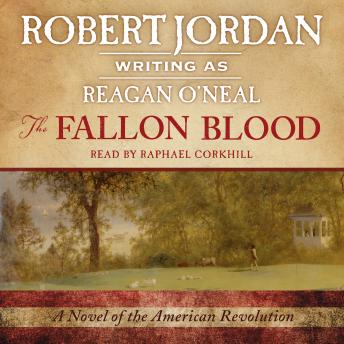 The Fallon Blood: A Novel of the American Revolution

Download or Stream instantly more than 55,000 audiobooks.
Listen to "The Fallon Blood: A Novel of the American Revolution" on your iOS and Android device.

From phenomenally successful fantasy author Robert Jordan (The Wheel of Time), writing as Reagan O'Neal, comes The Fallon Blood, a splendid story of the American Revolution, now for the first time in audiobook format.

In 1765, Michael Fallon, an Irishman on the run from brutal English overlords, makes his way to Charleston, South Carolina, as an indentured servant. Bound over to Thomas Carver, a successful merchant, he quickly shows a knack for trade -- and a disturbing attraction to Carver's beautiful, sensual daughter, Elizabeth. With luck and intelligence -- and not without bloodshed -- he rises into the rice-planting aristocracy of the Carolina Lowcountry, where a frontier spirit pulses beneath the superficial trappings of an agrarian society that is heading rapidly toward revolution.

Michael Fallon hopes for peace. But the winds of war are rising, and the planter must become a privateer....

And the early dalliance with Elizabeth leaves a bitter aftertaste....

This audiobook follows the less familiar Southern course of the war, including the battles of Cowpens, King's Mountain, and Eutaw Springs (the bloodiest battle on the continent until Shiloh); and brings onto center stage such notables as Ben Franklin, Cornwallis, the Swamp Fox Francis Marion, the British Colonel 'Butcher' tarleton, Colonel William Moultrie, the Marquis de Lafayette -- and a true cast of thousands!