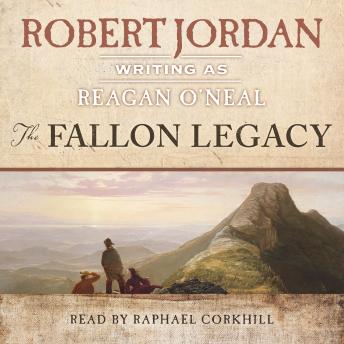 Download or Stream instantly more than 55,000 audiobooks.
Listen to "The Fallon Legacy" on your iOS and Android device.

The thrilling conclusion to Robert Jordan's acclaimed Fallon trilogy traces the family's fortunes as it expands westward. The Fallon Legacy is the tale of a father and son who have never met but who share a destiny and drive born of their blood, with one struggling to hold our nation together and the other to expand it.

Well past his prime, Robert Fallon now fights the battles of politics to save the country he cherishes from civil war. It is 1832, and the high tariffs that protect northern industry are crippling the South. President Andrew Jackson thinks force is the answer to the South's threats of secession. Robert must pay a final-hour visit to Washington, as an appeal to Jackson and Congress to pass a compromise tariff before the country is torn apart.

Like his father and grandfather before him, James Fallon is a man of vision and iron will, determined to succeed. But where his forebears were men of the sea, he is a man of the land, the vast land of northern Mexico--a land called Texas.

James sets out for Stephen Austin's colony of Americans with dreams of a horse-breeding empire. The land is harsh enough, but he soon learns that Fallon's past harbors deadly shadows--Cordelia Applegate and Gerard Fourrier. With political influence, hired pistoleros, and Comanches, they seek to destroy all Fallons.

But James has more pressing troubles. He and the other settlers, including Jim Bowie, Austin, and Sam Houston, are outraged as their rights of property come and go with the shifting winds of Mexican politics.

Rumors of Santa Anna's rise to power in Mexico City have driven the Americans to prepare to fight for the land that has absorbed their sweat and blood. Santa Anna will soon be on the march to drive the yanquis out of Mexico, and events are moving swiftly toward the conflagration that will give birth to the Republic of Texas.