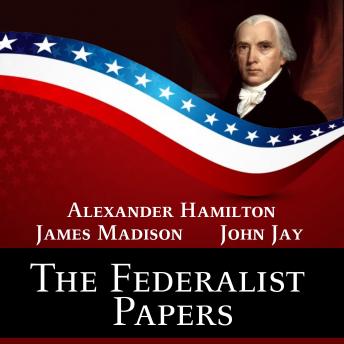 Download or Stream instantly more than 55,000 audiobooks.
Listen to "The Federalist Papers" on your iOS and Android device.

Written by Alexander Hamilton, John Madison and John Jay - three of the Founding Fathers of the United States of America - The Federalist Papers combined to form one of the most important document in American history. Containing a collection of 85 detailed papers about the US Constitution and the explanation of the various laws that the Government itself has to abide by, along with every single one of its branches, this writing presented more or less in laymen terms the exact reasons why ratifying the Constitution was a good idea.

The Papers offer a detailed outline on the separation of powers and on how political power has to be used within severe limitation in order to prevent the people from having to give up their freedom and rights as citizens. Written in a time when the ratification of the Constitution still hung in the balance, they acted as a valuable incentive to help inform and convince both state legislators and the general population of its crucial importance.

To exemplify the value of The Federalist Papers, it is worth mentioning the suggestion that the late historian Clinton Rossiter made regarding anyone who didn't wish to be burdened with reading all 85 of the papers included in this work. He recommended a number of papers as the ones he considered to be the "most important," while later admitting that whoever read that selection would want to continue with the rest as well.

The Federalist Papers played a major role in the acceptance and ratification of the US Constitution, and are considered to be a writing of significant cultural, historical and political value today. If you want to learn more about your rights as an American citizen and the limitations of the US Central and Federal Government, as they were defined by the Founding Fathers themselves, reading this remarkable piece of political literature is an absolute must.