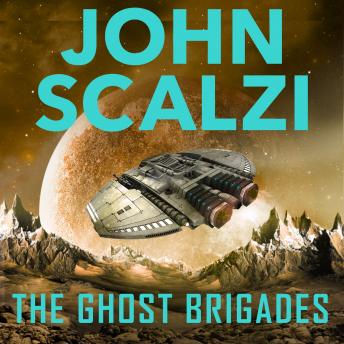 Download or Stream instantly more than 55,000 audiobooks.
Listen to "The Ghost Brigades" on your iOS and Android device.

The sequel to his extraordinary Old Man's War, John Scalzi's The Ghost Brigades is the second in The Old Man's War series.
Who can you trust, if you can't trust yourself?
Three hostile alien races have united against humanity, determined to halt our expansion into space. The mastermind behind this lethal alliance is a traitor - Charles Boutin. He was a Colonial Defence Force scientist, with access to their biggest military secrets. Now the CDF's only hope is to discover Boutin's plan. Trouble is, Boutin's dead.
As a super-soldier created from Boutin's own DNA, Jared Dirac may have answers. However, when Dirac fails to access the scientist's memories, he's transferred to the Ghost Brigades for training. These elite troops are also cloned from the dead, so he might fit in. But will Dirac's memory return as the enemy plots the fate of humankind? And whose side is Dirac really on?