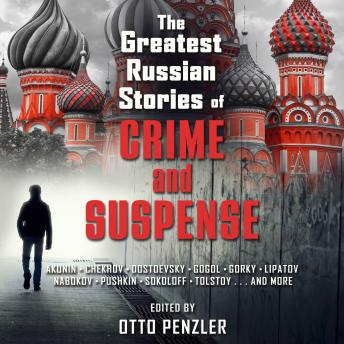 The Greatest Russian Stories of Crime and Suspense

Download or Stream instantly more than 55,000 audiobooks.
Listen to "The Greatest Russian Stories of Crime and Suspense" on your iOS and Android device.

A collection of the greatest Russian crime and mystery fiction-including stories by Akunin, Chekhov, Dostoevsky, Gogol, Nabokov, Pushkin, and Tolstoy.

Many of the greatest Russian authors, including Dostoevsky, Tolstoy, Chekhov, and Pushkin, produced crime and mystery fiction, a type of literature that was largely suppressed during the Soviet era because it did not glorify the state, but rather, gave significance to individual characters. With the fall of the Soviet Union, mystery writers have become some of the most successful novelists in Russia, and there is a renewed interest in, and appreciation of, the great crime classics of an earlier era.

There have been few policemen, and virtually no private detectives or amateur sleuths, in Russian history worthy of approbation, and in consequence its literature is dramatically different from its Western counterparts. Criminals in Mother Russia tend to be caught or punished by their own consciences or by ghosts, and the notion of a criminal trial as we know it is utterly alien. Nonetheless, the enormous talent and passion of Russian authors has long been justly acclaimed, and the rare forays they made into the loosely defined genre of mystery fiction rank among the world's classics. This volume is the first collection ever devoted entirely to Russian crime fiction.