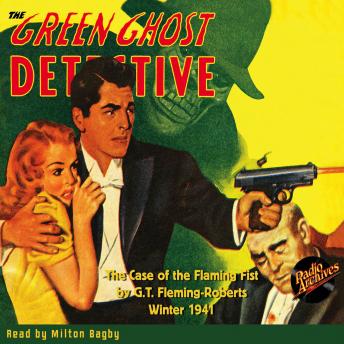 Download or Stream instantly more than 55,000 audiobooks.
Listen to "The Green Ghost Detective Winter 1941" on your iOS and Android device.

The pulp magazine had three names during its seven issue run. The Ghost, Super-Detective as the pulp magazine was originally titled for the first three issues from January, 1940 to the Summer issue of 1940. The name of the magazine was changed to The Ghost Detective for the Fall 1940 issue and starting with the Winter 1941 issue and lasting for three issues, the name was changed to The Green Ghost Detective, before succumbing to the World War II paper shortage. Better Publications was the publisher and Leo Margulies was the editor. The character stories about the Ghost Detective continued in Thrilling Mystery magazine. These three stories are torn from the pages of the Winter, 1941 issue of The Green Ghost Detective magazine and is read with stirring intensity by award winning voice actor, Milton Bagby.