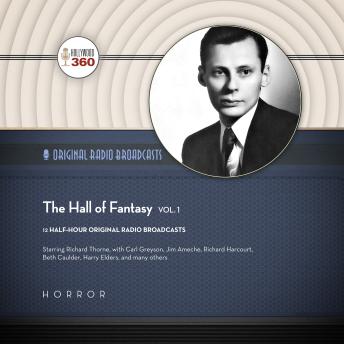 The Hall of Fantasy, Vol. 1

Download or Stream instantly more than 55,000 audiobooks.
Listen to "The Hall of Fantasy, Vol. 1" on your iOS and Android device.

Here are twelve episodes of the horror and mystery series written and produced by radio announcers beginning in 1946.

There were several series under the Hall of Fantasy banner, all produced by Richard Thorne. The first originated from radio station KALL in Salt Lake City. Richard Thorne and Carl Greyson were announcers for the station and coproduced the bare-bones horror series beginning in 1946. Written or adapted by Robert Olson and directed by Thorne, the stories were mostly murder mysteries with traditional endings. This first series ended in 1947 when Thorne and Greyson went their separate ways.

The Hall of Fantasy was revived in 1949, when by pure coincidence, Thorne and Greyson found themselves working together at WGN in Chicago. This time the series featured stories with shocking endings involving struggles against the supernatural in which man was usually the loser.

In Chicago, actor Don Ameche's brother, Jim Ameche, sometimes appeared in the episodes. In 1952 The Hall of Fantasy went nationwide over the Mutual network, with Thorne writing original horror stories and also adapting classics of literature, including Robert Louis Stevenson's "Markheim" and Edgar Allan Poe's "The Cask of Amontillado" and "The Tell-Tale Heart."

Episodes included are: "The Perfect Script," "The Judge's House," "Man-Size, in Marble," "Markheim," "The Mark of Shame," "The Cask of Amontillado," "The Black Figurine of Death," "The Night the Fog Came," "The Return from Death," "The Tell-Tale Heart," "Stone's Revenge," and "The Castle of Lavoka."