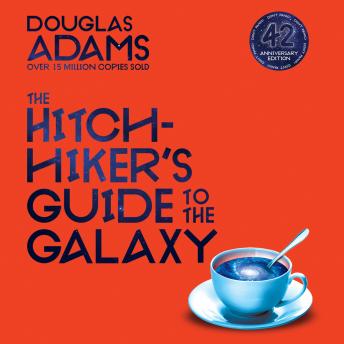 The Hitchhiker's Guide to the Galaxy: 42nd Anniversary Edition

Download or Stream instantly more than 55,000 audiobooks.
Listen to "The Hitchhiker's Guide to the Galaxy: 42nd Anniversary Edition" on your iOS and Android device.

The intergalactic adventures of Arthur Dent begin in the first volume of the 'trilogy of five', Douglas Adams' comedy sci-fi classic The Hitchhiker's Guide to the Galaxy, read by Stephen Fry.

On 12 October 1979 the most remarkable book ever to come out of the great publishing corporations of Ursa Minor (and Earth) was made available to humanity – The Hitchhiker's Guide to the Galaxy.

It's an ordinary Thursday lunchtime for Arthur Dent until his house gets demolished. The Earth follows shortly afterwards to make way for a new hyperspace bypass and his best friend has just announced that he's an alien. At this moment, they're hurtling through space with nothing but their towels and an innocuous-looking book inscribed with the big, friendly words: DON'T PANIC.

The weekend has only just begun . . .

Follow Arthur Dent's galactic (mis)adventures in the rest of the trilogy with five parts: The Restaurant at the End of the Universe, Life, the Universe and Everything, So Long, and Thanks for All the Fish, and Mostly Harmless.