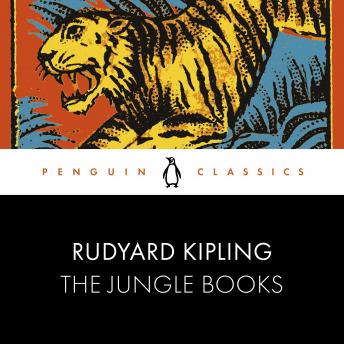 Download or Stream instantly more than 55,000 audiobooks.
Listen to "The Jungle Books" on your iOS and Android device.

The story of the man-cub Mowgli who is raised by wolves in the Indian jungle, guided by his mentors Baloo the bear, Bagheera the black panther and the ancient python Kaa, and who confronts his arch-enemy Shere Khan the tiger, is one of the greatest literary myths ever created. Mowgli's adventures are juxtaposed with other animal stories set in the British Empire, ranging from the heroic battle of 'Rikki-tikki-tavi' and the Himalayan pastoral 'Purun Bhagat' to the drama of survival in 'The White Seal'. With The Jungle Books Rudyard Kipling drew on ancient beast fables, Buddhist philosophy and memories of his Anglo-Indian upbringing to create a rich, symbolic portrait of man and nature, and an eternal classic of childhood that has had a lasting impact on our imaginations.

Part of a series of new editions of Kipling's works in Penguin Classics, this volume contains a General Preface by Jan Montefiore and an introduction by Kaori Nagai discussing the many imperial, Indian and literary contexts of The Jungle Books.