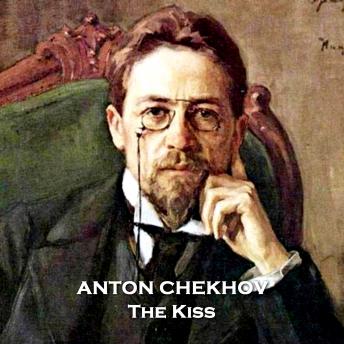 Download or Stream instantly more than 55,000 audiobooks.
Listen to "The Kiss" on your iOS and Android device.

Anton Pavlovich Chekhov was born on 29th January 1860 in Taganrog, on the south coast of Russia. His family life was difficult; his father was strict and over-bearing but his mother was a passionate story-teller, a subject Chekhov warmed to. As he later said; 'our talents we got from our father, but our soul from our mother'. At school Chekhov was distinctly average. At 16 his father mis-managed his finances and was declared bankrupt. His family fled to Moscow. Chekhov remained and eked out a living by various means, including writing and selling short sketches to newspapers, to finish his schooling. That completed and with a scholarship to Moscow University obtained he rejoined his family.He was able to help support them by selling satirical sketches and vignettes of Russian lifestyles and gradually obtained further commissions. In 1884, he qualified as a physician and, although it earned him little, he often treated the poor for free, he was fond of saying 'Medicine is my lawful wife, and literature is my mistress.'His own health was now an issue as he began to cough up blood, a symptom of tuberculosis. Despite this his writing success enabled him to move the family into more comfortable accommodation. Chekhov wrote over 500 short stories which included many, many classics including 'The Kiss' and 'The Lady with a Dog'. His collection 'At Dusk' won him the coveted Pushkin Prize when was only 26. He was also a major playwright beginning with the huge success of 'Ivanov' in 1887. In 1892 Chekhov bought a country estate north of Moscow. Here his medical skills and money helped the peasants tackle outbreaks of cholera and bouts of famine. He also built three schools, a fire station and a clinic. It left him with less time for writing but the interactions with real people gained him detailed knowledge about the peasantry and their living conditions for his stories. His most famous work, 'The Seagull' was received disastrously at its premiere in St Petersburg. It was later restaged in Moscow to highlight its psychological aspects and was a huge success. It led to 'Uncle Vanya', 'The Three Sisters' and 'The Cherry Orchard'. Chekhov suffered a major lung hemorrhage in 1897 while visiting Moscow. A formal diagnosis confirmed tuberculosis and the doctors ordered changes to his lifestyle. Despite a dread of weddings the elusive literary bachelor quietly married the actress Olga Knipper, whom he had met at rehearsals for 'The Seagull', on 25th May 1901.By May 1904 with his tuberculosis worsening and death imminent he set off for the German town of Badenweiler writing cheerful, witty letters to his family and assuring them his health was improving. On 15th July 1904 Anton Chekhov died at Badenweiler. He was 44.