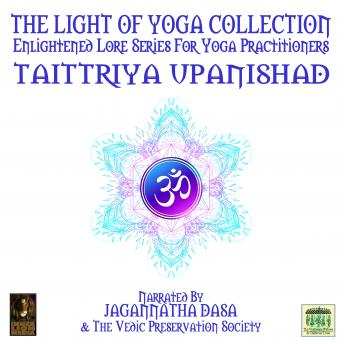 Download or Stream instantly more than 55,000 audiobooks.
Listen to "The Light Of Yoga Collection - Taittriya Upanishad" on your iOS and Android device.

The Upanishads are an assortment of texts central to Hinduism (or the Sanatan Dharma) recorded from oral traditions. They contain the philosophical principles and concepts of Hinduism, including karma (right action), brahman (ultimate reality), the atman (true Self or soul), moksha (liberation from the cycle of reincarnation) and other complex Vedic doctrines which explain Self-realization through the ancient yoga system and other meditational and service practices.
'Upanishad' is a Sanskrit word which translates to "sitting at the feet of" or "sitting down near.' This alludes to receiving wisdom and guidance humbly from a realized guru.
There are more than 200 Upanishads. Thirteen of these include the core philosophical teachings of what we now call Hinduism. The philosophical concepts contained in the Upanishads are principal to the Sanatan Dharma, but many are also shared with Buddhism and Jainism.
The deeply poetic texts govern ideals of ultimate Self-realization as well as concepts of non-violence, compassion, charity and self-restraint as ethical concerns.
Beautifully presented by Jagannatha Dasa and the artists and devotees of the Vedic Preservation Society here is an audiobook which not only entertains, enlightens and deeply informs but just might positively change your life forever for the better.
Music by AudioNautix