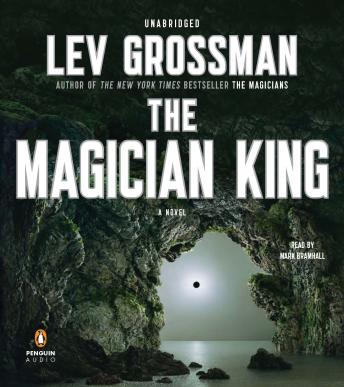 The Magician King: A Novel

Download or Stream instantly more than 55,000 audiobooks.
Listen to "The Magician King: A Novel" on your iOS and Android device.

Return to Fillory in the riveting sequel to the New York Times bestseller and literary phenomenon, The Magicians, now an original series on Syfy, from the author of the #1 bestselling The Magician’s Land.

Quentin Coldwater should be happy. He escaped a miserable Brooklyn childhood, matriculated at a secret college for magic, and graduated to discover that Fillory—a fictional utopia—was actually real. But even as a Fillorian king, Quentin finds little peace. His old restlessness returns, and he longs for the thrills a heroic quest can bring.

Accompanied by his oldest friend, Julia, Quentin sets off—only to somehow wind up back in the real world and not in Fillory, as they’d hoped. As the pair struggle to find their way back to their lost kingdom, Quentin is forced to rely on Julia’s illicitly learned sorcery as they face a sinister threat in a world very far from the beloved fantasy novels of their youth.