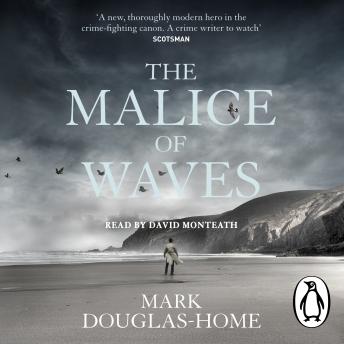 The Malice of Waves

Download or Stream instantly more than 55,000 audiobooks.
Listen to "The Malice of Waves" on your iOS and Android device.

Penguin presents the unabridged, downloadable, audiobook edition of The Malice of Waves by Mark Douglas-Home, read by David Monteath.

Investigator Cal McGill uses his knowledge of tides, winds and currents to solve mysteries no-one else can.

Five years ago, fourteen-year-old Max Wheeler disappeared from a remote Scottish island. None of the six police and private investigations since have shed any light on what happened.

Unable to let go, Max's family call in Cal McGill - known as 'The Sea Detective' - hoping he'll force the sea to give up its secrets. Yet Cal finds he is an outsider to a broken family, and an unwelcome stranger in a village which has endured years of suspicion.

Cal knows that a violent storm is approaching. But what he doesn't know is that when it cuts off the island, a killer will see their chance...
'The Malice of Waves is the first novel literally to give me nightmares ... for a crime novel that's surely a mark of distinction' Herald

'Stewing pot of intrigue and mystery . . . another super read' Lovereading
'Really good stuff, full of atmosphere, and accomplished in both prose and plot' Morning Star
'Raises the bar for Scottish crime fiction . . . elegantly written and compelling' Scotsman
Praise for the series: