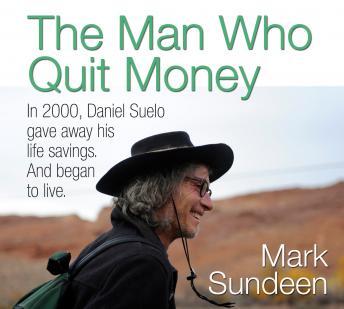 The Man Who Quit Money

Download or Stream instantly more than 55,000 audiobooks.
Listen to "The Man Who Quit Money" on your iOS and Android device.

A Walden for the 21st century, the true story of a man who has radically reinvented 'the good life.'

In 2000, Daniel Suelo left his life savings-all thirty dollars of it-in a phone booth. He has lived without money-and with a newfound sense of freedom and security-ever since.

The Man Who Quit Money is an account of how one man learned to live, sanely and happily, without earning, receiving, or spending a single cent. Suelo doesn't pay taxes, or accept food stamps or welfare. He lives in caves in the Utah canyonlands, forages wild foods and gourmet discards. He no longer even carries an I.D. Yet he manages to amply fulfill not only the basic human needs-for shelter, food, and warmth-but, to an enviable degree, the universal desires for companionship, purpose, and spiritual engagement. In retracing the surprising path and guiding philosophy that led Suelo into this way of life, Sundeen raises provocative and riveting questions about the decisions we all make, by default or by design, about how we live-and how we might live better.