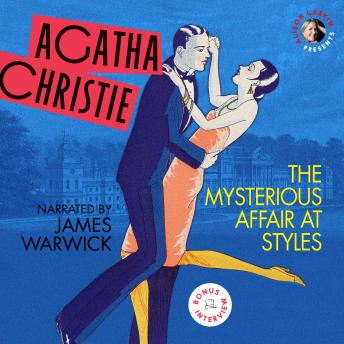 The Mysterious Affair at Styles

Download or Stream instantly more than 55,000 audiobooks.
Listen to "The Mysterious Affair at Styles" on your iOS and Android device.

When Emily Inglethorpe dies suspiciously after marrying a man 20 years her junior, her nephew, Captain Hastings, recruits his old friend Hercule Poirot to help in the investigation.

Other popular audiobooks from Alison Larkin Presents include the AudioFile Magazine Earphones Award-winning recording of Peter Pan and The Inconsiderate Waiter by J. M. Barrie, The Secret Adversary by Agatha Christie, the 200th anniversary audio editions of Pride and Prejudice, Emma, and Persuasion and Poems by Jane Austen, and Alice in Wonderland and Jabberwocky with a short excerpt from the Life and Letters of Lewis Carroll and Through the Looking Glass and Phantasmagoria by Lewis Carroll.