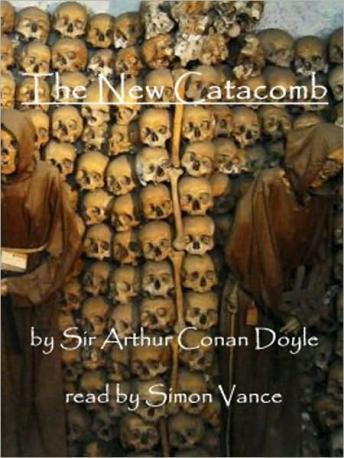 Download or Stream instantly more than 55,000 audiobooks.
Listen to "The New Catacomb" on your iOS and Android device.

Though Sir Arthur Conan Doyle is best known for his detective stories, he also wrote other short stories which are masterpieces of mystery and suspense. In some of the stories, a suppressed uneasiness gradually builds up and evolves into sheer horror; in others, the story line unexpectedly changes and comes to an unexpected conclusion. In "The New Catacomb," deceit and terror are buried in the deep recesses of an Roman archeological find. Narrator Simon Vance is a native of Brighton, England. After graduating from the Brighton School of Music and Drama, and Leeds University, Vance embarked on a lengthy career with the BBC, in addition to narrating for the Talking Book Service of the Royal National Institute for the Blind. Later, he moved his residence and narrating career to California. His work has received numerous AudioFile 'Earphone' awards and Audie Award nominations.