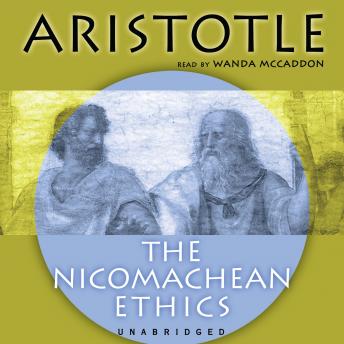 Download or Stream instantly more than 55,000 audiobooks.
Listen to "The Nicomachean Ethics" on your iOS and Android device.

Named for Aristotle's son, Nicomachus, who was the first to edit this work, The Nicomachean Ethics plays a prominent role in defining Aristotelian ethics. In the ten books of this work, Aristotle explains the good life for man: the life of happiness.
For Aristotle, happiness exists when the soul is in accordance with virtue. Virtue exists in a deliberate choice of actions that take a middle course between excess and deficiency; this is the famous doctrine of the "golden mean." Courage, for example, is the mean between cowardice and rashness. Justice is the mean between a man's getting more or less than his due. The supreme happiness, according to Aristotle, is to be found in a life of philosophical contemplation or, at least, in a virtuous life of political activity and public munificence.
A student of Plato and a teacher of Alexander the Great, Aristotle is one of the towering figures in Western thought.