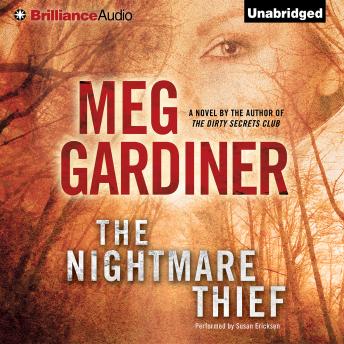 The Nightmare Thief: A Novel

Download or Stream instantly more than 55,000 audiobooks.
Listen to "The Nightmare Thief: A Novel" on your iOS and Android device.

Autumn Reiniger expects something special for her twenty-first birthday. Daddy’s already bought her the sports car, the apartment, and admission to the private college where she parties away her weekends. Now she wants excitement, and she’s going to get it.

Her father signs up Autumn and five friends for an “ultimate urban reality” game: a simulated drug deal, manhunt, and jailbreak. It’s a high-priced version of cops and robbers, played with fake guns and fast cars on the streets of San Francisco. Edge Adventures alerts the SFPD ahead of time that a “crime simulation” is underway, so the authorities can ignore the squealing tires and desperate cries for help.

Which is convenient for the gang of real kidnappers zeroing in on their target and a mammoth payday. Because Daddy doesn’t know that someone has spotted his hedge fund’s bulging profits, and the path to those riches runs right through Daddy’s Little Girl.

Working on a case nearby is forensic psychiatrist Jo Beckett and her partner, Gabe Quintana. When the pair encounters a suspicious group of men carting six sullen college kids to the woods for a supposed wilderness adventure, alarm bells ring. Jo takes a closer look and winds up with an invite to Autumn Reiniger’s twenty-first birthday party—a party she may never leave.