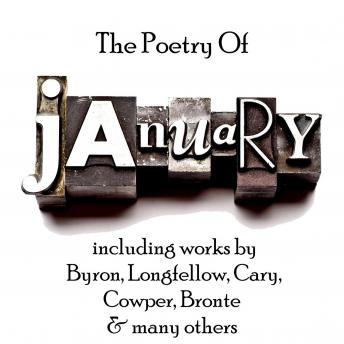 The Poetry of January

Download or Stream instantly more than 55,000 audiobooks.
Listen to "The Poetry of January" on your iOS and Android device.

January - the first month of the year in the Gregorian calendar ushers in the New Year. The cold and bleak landscape of winter however provides a rich background for our esteemed poets such as Byron, Longfellow, Cowper and Bronte to offer us their reflections and counterpoints.

Among our readers are Richard Mitchley and Ghizela Rowe. The tracks are; January - An Introduction; January 1 1828 By Nathaniel Parker Willis; Written January The 1st, 1792 By Janet Little; Written January 1st 1832 By Henry Alford; Promises That Fail Their Makers Lips By Daniel Sheehan; The Old Year By John Clare; At The Entering Of The New Year By Thomas Hardy; Written During An Aurora Borealis January 7th 1831 By Henry Alford; The Meeting By Henry Wadsworth Longfellow; A Sonnet Occasioned....... January 1616 By William Drummond; January 1795 By Mary Darby Robinson; A Tale Founded On A Fact Which Happened In January 1779 By William Cowper; The First Snowfall By James Russell Lowell; Arm The First Rifle Ballad, January 1852 By Martin Farquhar Tupper; On The Discoveries of Captain Lewis, January 14th 1807 By Joel Barlow; A Calendar Of Sonnets - January By Helen Hunt Jackson; Eden In Winter By Vachel Lindsay; It Is Winter By Daniel Sheehan; Sonnet 59 By Henry Alford; Snow Flakes By Henry Wadsworth Longfellow; Work Without Hope By Samuel Taylor Coleridge; Snow Beneath Who's Chilly Softness By Emily Dickinson; GH On My Thirty Third Birthday, January 22nd 1821 By Lord Byron; January Cold Desolate By Christina Georgina Rossetti; The Farm Woman's Winter By Thomas Hardy; The Winters Are So Short By Emily Dickinson; A Song For January 26th 1824 By Charles Thompson; Ode On The Present Time, 27th January 1795 By Amelia Opie; Winter - My Secret By Christina Georgina Rossetti; Month Of January By Hilaire Belloc; Pray To What Earth Does This Sweet Cold Belong By Henry David Thoreau; January By Alice Carey.