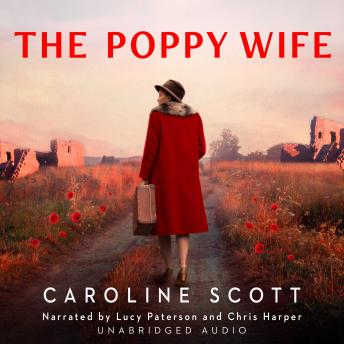 Download or Stream instantly more than 55,000 audiobooks.
Listen to "The Poppy Wife" on your iOS and Android device.

Until she knows her husband’s fate, she cannot decide her own...
An epic debut novel of forbidden love, loss, and the shattered hearts left behind in the wake of World War I

1921. Families are desperately trying to piece together the fragments of their broken lives. While many survivors of the Great War have been reunited with their loved ones, Edie’s husband Francis has not come home. He is considered ‘missing in action’, but when Edie receives a mysterious photograph taken by Francis in the post, hope flares. And so she begins to search.

Harry, Francis’s brother, fought alongside him. He too longs for Francis to be alive, so they can forgive each other for the last things they ever said. Both brothers shared a love of photography and it is that which brings Harry back to the Western Front. Hired by grieving families to photograph gravesites, as he travels through battle-scarred France gathering news for British wives and mothers, Harry also searches for evidence of his brother.

And as Harry and Edie’s paths converge, they get closer to a startling truth.

An incredibly moving account of an often-forgotten moment in history, The Poppy Wife tells the story of the thousands of soldiers who were lost amid the chaos and ruins, and the even greater number of men and women desperate to find them again.