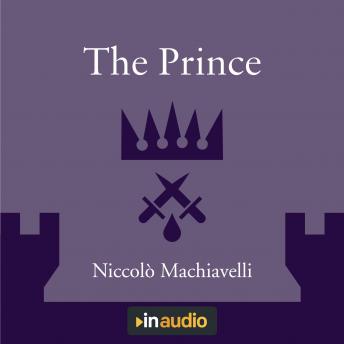 Download or Stream instantly more than 55,000 audiobooks.
Listen to "The Prince" on your iOS and Android device.

While Machiavelli worked and played an active role in shifting the ruling powers in Europe, he developed a political philosophy based on the belief that the unity of the state is above all else. Because Machiavelli lived in such tumultuous times, he placed a lot of value on acting to unite the state. By “the state,” he means any organization of power. As you can guess from the title of the audiobook, most of Machiavelli’s phrasing revolves around princedoms, or monarchies ruled by a prince, but he writes that the principles can be applied to any sort of organized political power.

In The Prince, it is asserted that a good ruler is one that works for the benefit of the state at all times, even when this requires acting immorally or unethically. Basically, the ends justify the means, even if the means are killing innocent people, blackmailing, and being deceitful.This idea was contentious then and now – many people believe that rulers should act with kindness and lawfulness above all, rather than bending ethics to achieve the ends they want.

Throughout The Prince, Machiavelli uses the term “virtue” to describe the traits that were necessary for the security of the state. Machiavelli’s ideal virtues are not necessarily those of benevolence and kindness, but of bravery, pride, and the willingness to do whatever it takes to continue state unity. Machiavelli also spends a good bit of the audiobook reflecting on the means by which a ruler gains their power, as well as the traits a ruler should espouse. He asserts that a ruler who has gained their power by luck or without difficulty is able to rise to the top faster but is oftentimes unable to sustain the power long-term. On the other hand, a ruler who works to achieve their greatness will be able to maintain their power longer, even at the cost of doing things that may be perceived as lawless. He introduces the term “criminal virtue” to refer to those who achieve their power by acting immorally, but acting with the long-term goal of unity in mind.

Told in a straightforward manner and with a depth of understanding that comes from having a front-seat to the turmoil of Renaissance Italy’s government, this audiobook still stands as one of the most impactful works of political theory centuries later.