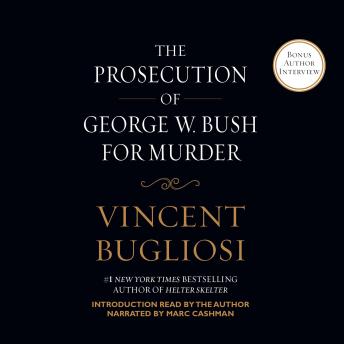 The Prosecution of George W. Bush for Murder

Download or Stream instantly more than 55,000 audiobooks.
Listen to "The Prosecution of George W. Bush for Murder" on your iOS and Android device.

Bestselling author Vincent Bugliosi has written the most important and thought-provoking book of his prolific career. In a meticulously researched and clearly presented legal case that puts George W. Bush on trial for murder after he leaves his presidency, Bugliosi delivers a searing indictment of the president and his administration. With what he believes is overwhelming evidence that President Bush took the nation to war in Iraq under false pretenses-a war that has caused great loss of life, cost this nation close to $1 trillion, and alienated most of our allies in the Western world-Bugliosi argues that it is George W. Bush who must be held accountable for what Bugliosi considers to be monumental crimes. In this groundbreaking book, Bugliosi, in his inimitable style, presents a powerful case against the man.