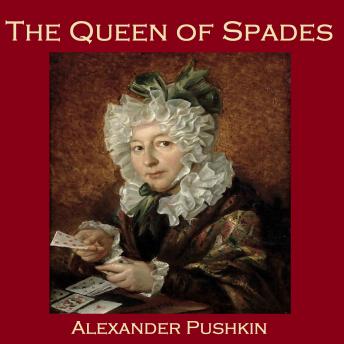 The Queen of Spades

Download or Stream instantly more than 55,000 audiobooks.
Listen to "The Queen of Spades" on your iOS and Android device.

Alexander Pushkin's greatest short story. Hermann, a young German officer serving in the Engineers regiment, is obsessed by gambling, although he never indulges in it himself. One night he hears a tale about how a wealthy 87-year-old Countess in St. Petersburg once learned the secret of how to win on three cards from the Duc d'Orleans. He becomes obsessed with learning the secret himself.

In pursuit of this aim, he becomes enamoured of the Countess' companion, the beautiful Lizaveta. A nocturnal visit to his paramour, however, turns to tragedy as he finds himself in the chamber of the Countess and tries first by persuasion and then by force to get her to reveal the secret of the cards. The denouement of the story is uncanny and captivating.